Yes, I said it. Yes, for some people, that is a blasphemous statement to make. I don’t enjoy shopping. At least for clothing. Nothing ever fits very well. Even after losing a few pounds, clothes still just don’t fit well so trying to buy them is the world’s most frustrating experience at times for me.

Yet, there is one type of clothing that I actually don’t mind shopping for. Running and workout attire. Could that be because it is typically stretchy and therefore will fit? Probably not. Especially when I think of all the hassle and drama I must endure when purchasing new running shoes each year. And that time has just come and it looks like I still might not have a pair I really like. But that is a story for another day.

Last week, Fleet Feet Chicago had its annual Fall Fashion Show. And just like last year, this year’s show did not disappoint me. Last year, I walked away with the feeling that running outside was really no big deal. This year, the motto was “there is no such thing as bad weather, just bad clothing.” The outfits that we saw really seemed to drive that point home for me. And honestly, I can’t wait for it to be cold so I can run outside. Weird? Maybe, but it is al true that I’m more excited than ever to run outside. 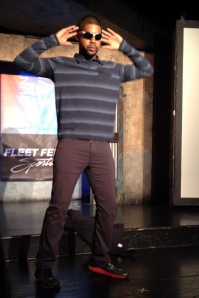 a casual look for the guys

As you might expect, there were outfits by all the major brands including Nike, Brooks, Pearl Izumi, Saucony and Asics just to name a few. There were also some outfits that were more casual and didn’t scream “I’m wearing an outfit perfect for running.” Aside from seeing great tops, layers and tights for colder weather, the clothes this fall had two things that really appeal to me. Pockets and color. Lots and lots of color.

The pockets have become a big deal for me because I’ve come to the conclusion that I don’t care for gear check at races. It is usually way too crowded and I have a fear that because I am so slow, I will not finish the race in time to get my stuff. It has gotten to the point that I am reluctant to use it for even a half marathon. Races shorter than a half I avoid it if possible. With the looks I saw at the fashion show, I have a better chance of avoiding gear check. Just about everything had some pockets somewhere that would hold my keys, ID and even my phone if necessary. I love that this came at a time when I was thinking I need to buy new running attire and it needs to have pockets since most of my current stuff doesn’t.

The other thing that was prominent was color. I’m not gonna lie. I prefer dark colors. And in the past when I have thought about getting running gear in something other than black, it is usually in pink and I will pass on it immediately. So you can imagine my delight to see women’s running gear in bright colors that were not pink. Last week I saw lime green, blues, yellows, oranges and of course some pink. However, the colors that I saw was done in a way that made me want to purchase the stuff.

And purchase things I have done. Fleet Feet also had a seminar on running in cold weather over the past weekend as well. It felt a bit like a continuation of the fashion show for me. In addition to showing the latest stuff in cold weather, they also showed us how to put it all together to stay way while running in the elements. I already knew how to do this mostly, but actually seeing it again was a great reminder. Not to mention, it reminded me to acquire some of the pieces I was missing so I could dress better.

Just like last year’s fashion show, there were models of all sizes and running abilities. I cannot stress enough how much I appreciate that Fleet Feet does this. Sometimes I think if only people who look like runners (i.e., people who have run numerous Boston marathons and have little to no extra fat on their bodies) modeling the stuff, then those who don’t look this way think there is no way they can do it. So those people might not try and they end up missing out on something that can be completely amazing.

In any event, since the Fashion Show last week, I have spent plenty of money on some great running attire. And every item I will be able to wear for things other than just running outside when it is cold. I still have a few pieces to add, but thanks to the show last week, I have plenty of options to think about when I pick up those last few items.

Here are a few of the pieces that I really like from Pearl Izumi, Zoot Sports, Saucony and Ice Breaker. In addition to the pops of color, there were more advances in putting more reflectivity on the stuff so you don’t necessarily have to run with an additional light on you if you don’t want to.